Scott Tuason—also (rather appropriately) known as Gutsy—had grown up loving the sea. A long-time diver and underwater photographer, he’s gone on countless dives around the world, as well as published award-winning books capturing the country’s rich marine life and diving culture. But it was only in 2012, while on a trip to Hawaii, that he first discovered the world of black water diving.

Header: Blanket octopus
Left: A jellyfish hovers over a driftfish
Right: An eel in its larval stage

Blackwater diving is not your regular night dive. It requires a near-superhuman ability to go against every basic human survival instinct. Divers are dropped into the middle of the ocean in the dead of night, attached by a short cable to weighted downlines that hold a string of faint lights. Then, they swim hundreds of feet down to catch sight of thousands of deep sea animals, from jellyfish to plankton, migrating upwards to feed in the nutrient-rich water. 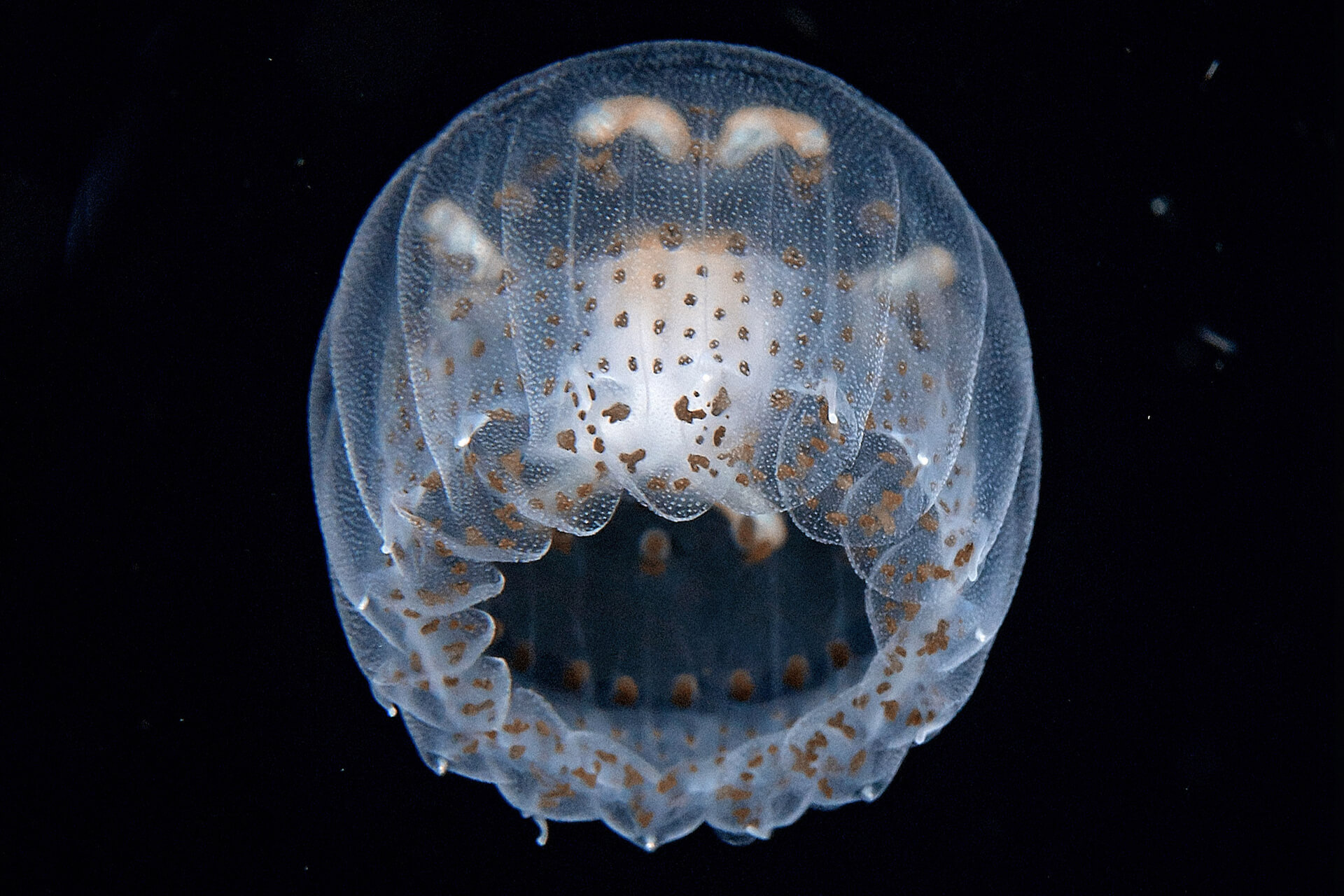 While he’s spotted a few manta rays and the odd shark or two in the water, most sea creatures Gutsy spots on his dives are smaller, non-predatory animals such as jellyfish, salps, and planktonic organisms.

“A lot of the stuff I had seen in that dive, I’d never seen before,” Gutsy recalls. “[By that time], I’d been diving for 30 years, but I just thought, ‘wow, this is different.’” From there, a new passion was born. 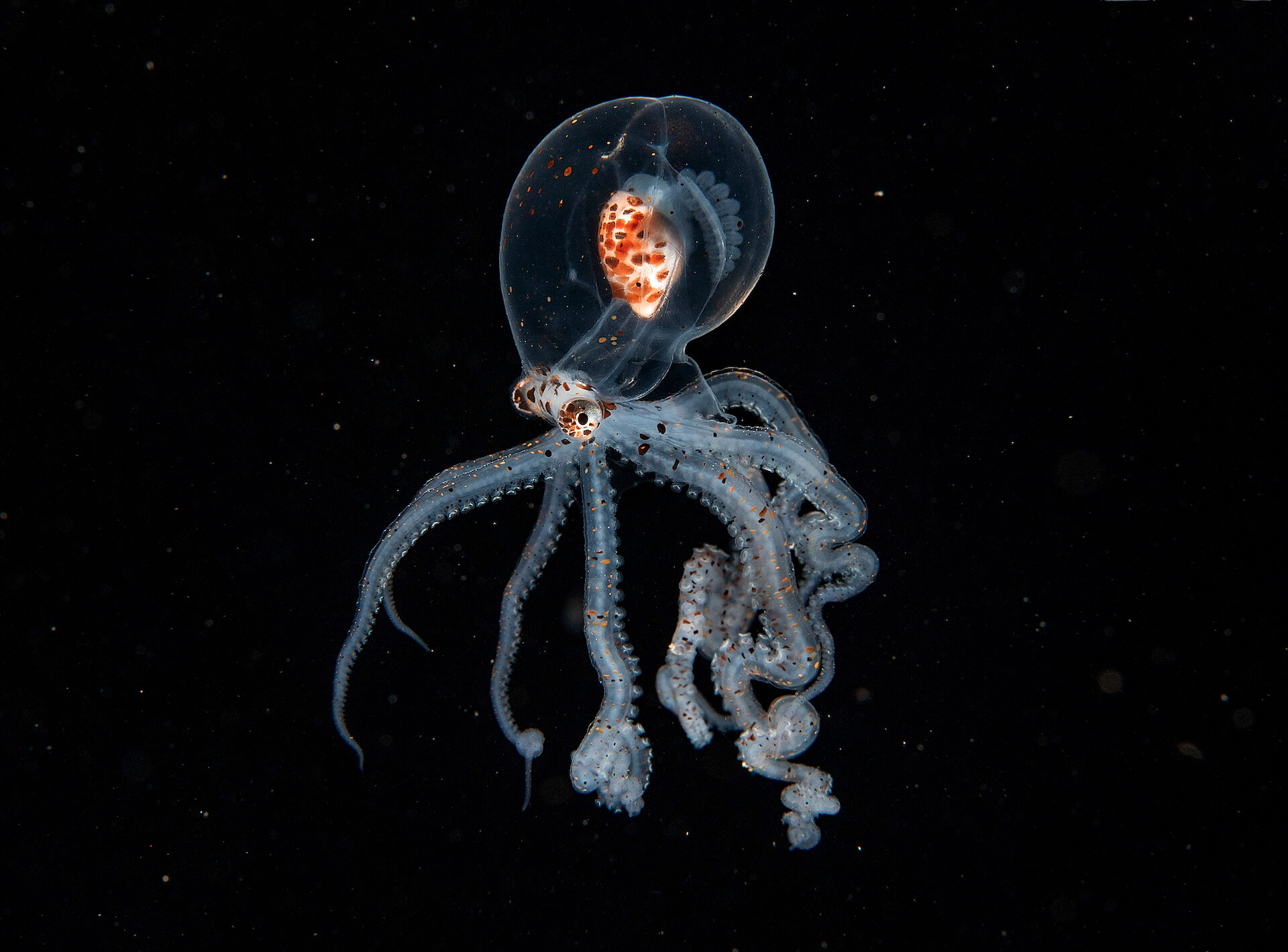 Realizing that blackwater diving didn’t have to be restricted to Hawaiian shores, Gutsy brought the practice with him when he returned to the Philippines. While the country’s abundance of reefs and shoals and diverse marine life ensured no shortage of potential dive sites, the mere concept of what he was doing earned more than a few raised eyebrows.

A tripod fish in its post-larval phase

Top: A sea anemone in its larval phase
Bottom: A dwarf lionfish

“There are certain animals that I’ve always wanted to shoot, and it’s always a special occasion when [I find them].” Some of Gutsy’s most memorable animal encounters include the first time he photographed the paper nautilus and blanket octopus. Next on his list is an adult oarfish, as well as “those dark zone guys, the really weird-looking ones.”

An Argonaut, also known as a paper nautilus

Many of Gutsy’s images capture sea creatures in their juvenile life stages, which are rarely seen on camera. With so few books and ID guides that can help him figure out what they are, he reached out to a fish scientist he knew for help. Over time, he’s built a network of scientists from around the world that help him identify the species of creatures in his photos.

Trevally larva inside a planktonic salp

Thankfully, it didn’t take too long for others to catch on. Today, black water diving is rapidly becoming a popular activity among divers and marine enthusiasts, with dive shops in Anilao and Baler offering guided dives for beginners. Now recognized as the region’s leading blackwater diving expert, Gutsy helps train local resorts and instructors on dive safety, as well as organizes his own trips to lesser-known spots around the Philippines. 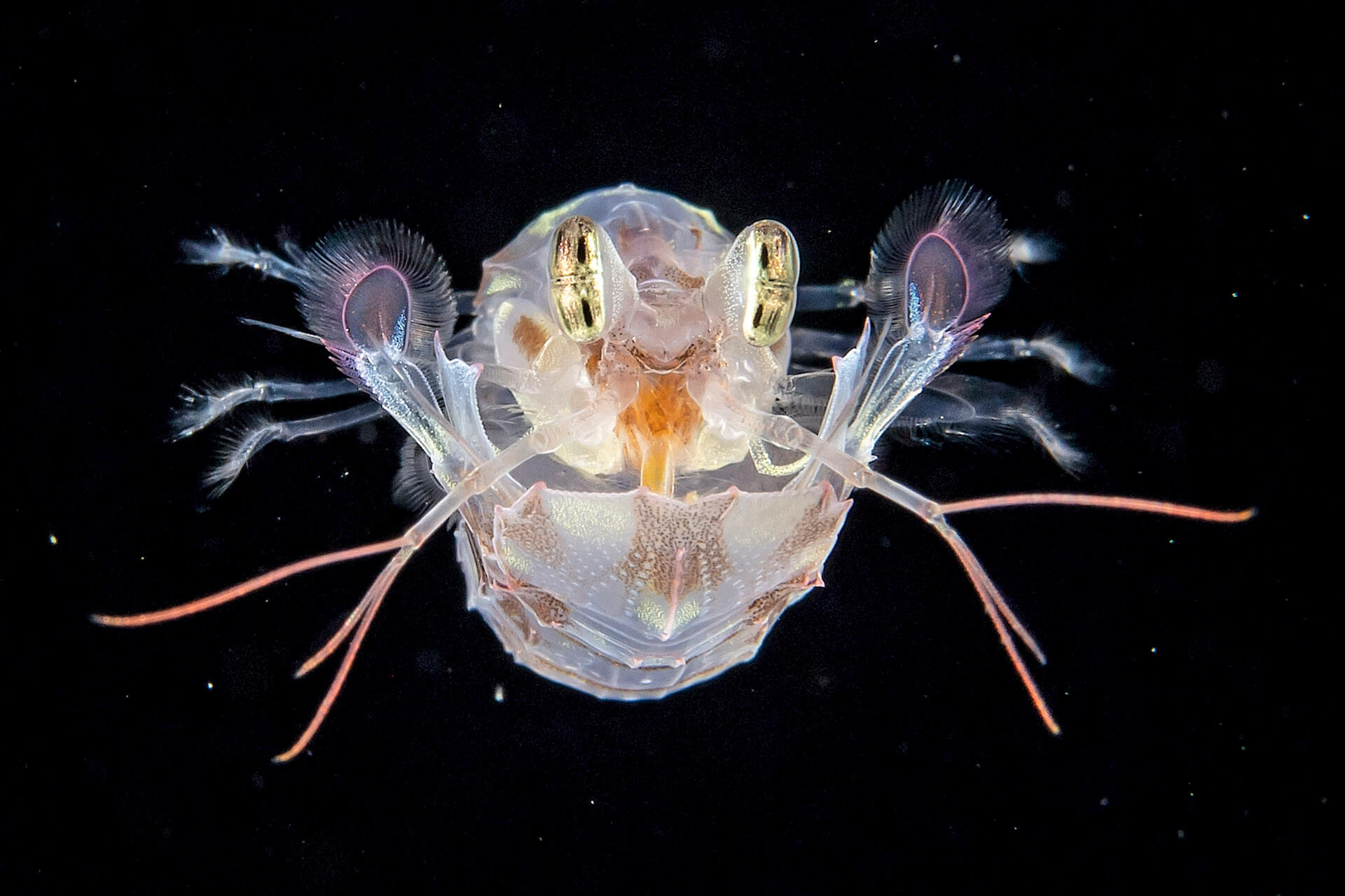 As a wildlife photographer himself, it came as no surprise that he would later mix his two passions, bringing his camera along on dive trips to capture what he saw on film. The result is a stunning collection of images; otherworldly creatures luminescent against the pitch-black of the deep sea. 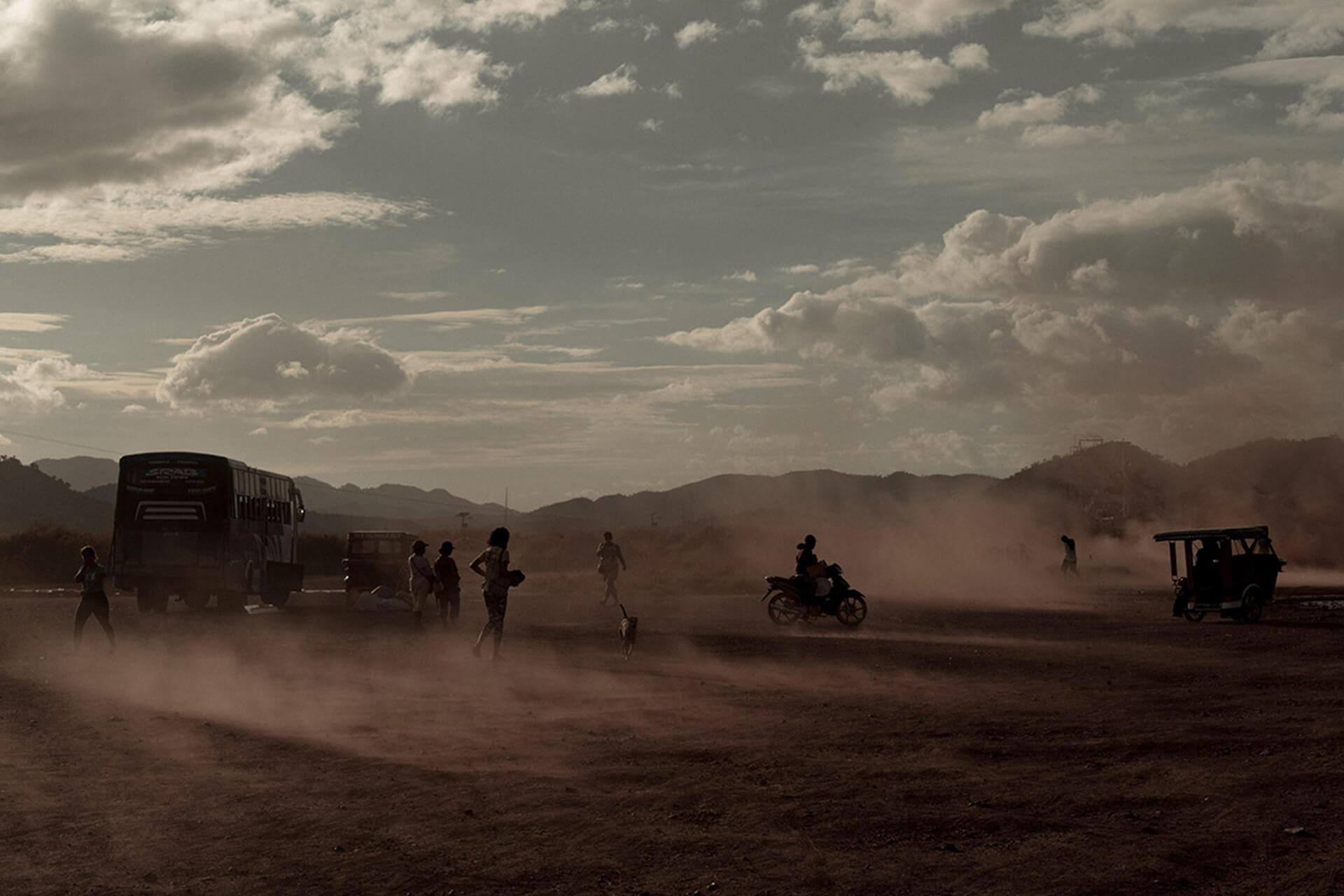 Waves for Water Philippines is bucking old notions of the NGO and volunteer experience, one filter at a time. 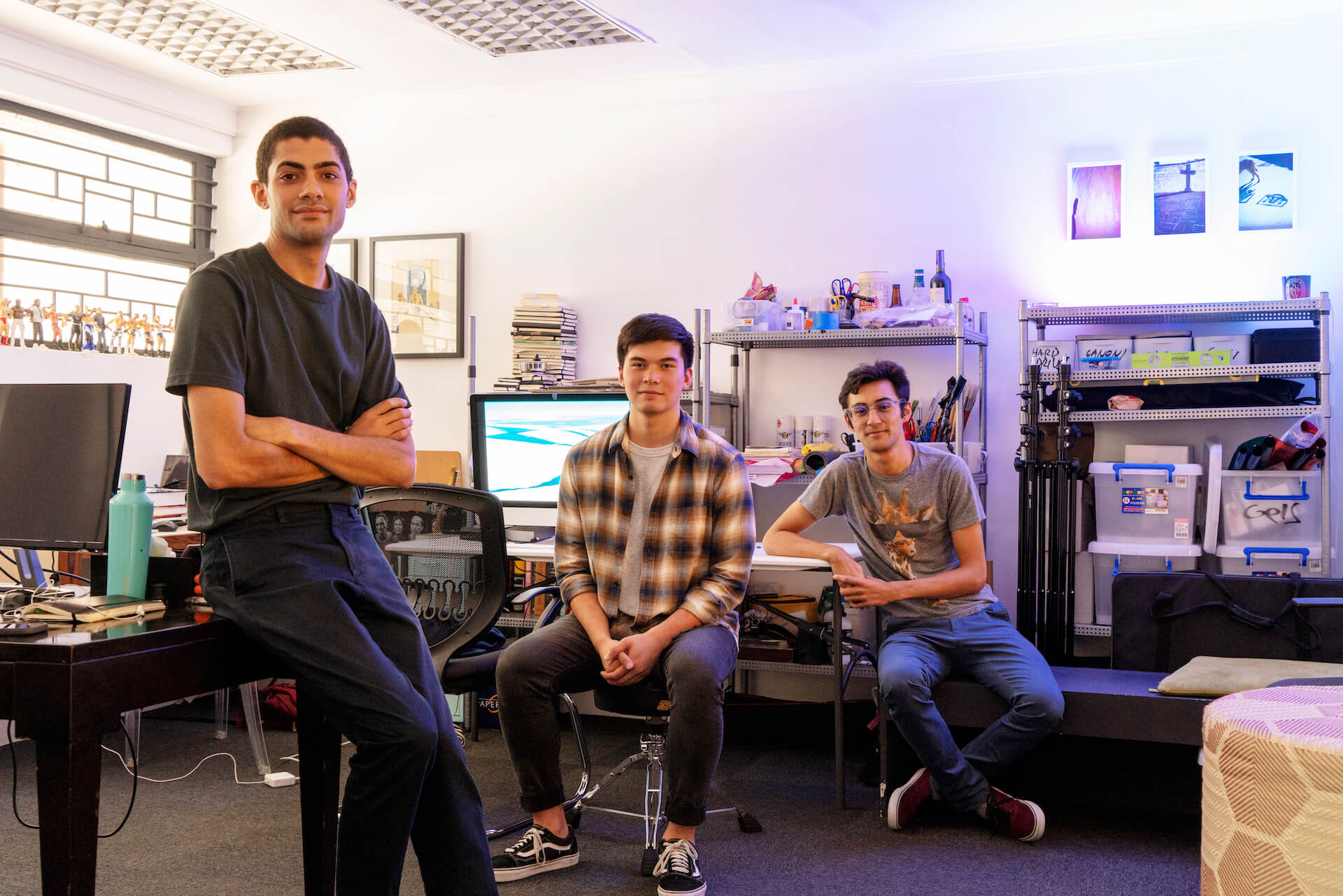 What sets one gallery apart from the others? As creative agency and gallery Tarzeer Pictures launches its sophomore exhibition—we set out to find out. 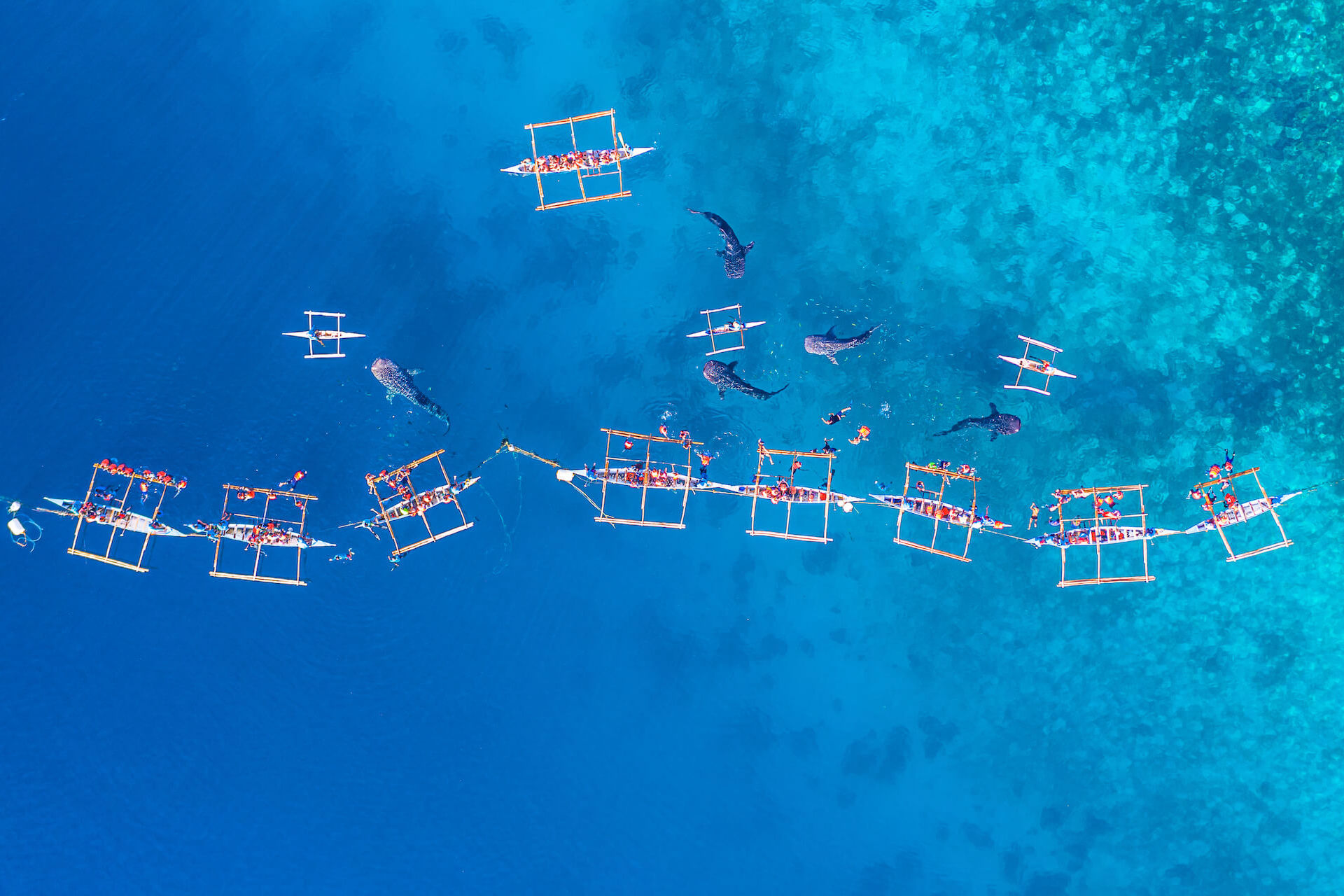 Where The Whale Sharks Remain

Whale shark tourism has uplifted the lives of the locals in Oslob, who keep a close relationship with these gentle giants. But where do we draw the line between tourism and conservation? 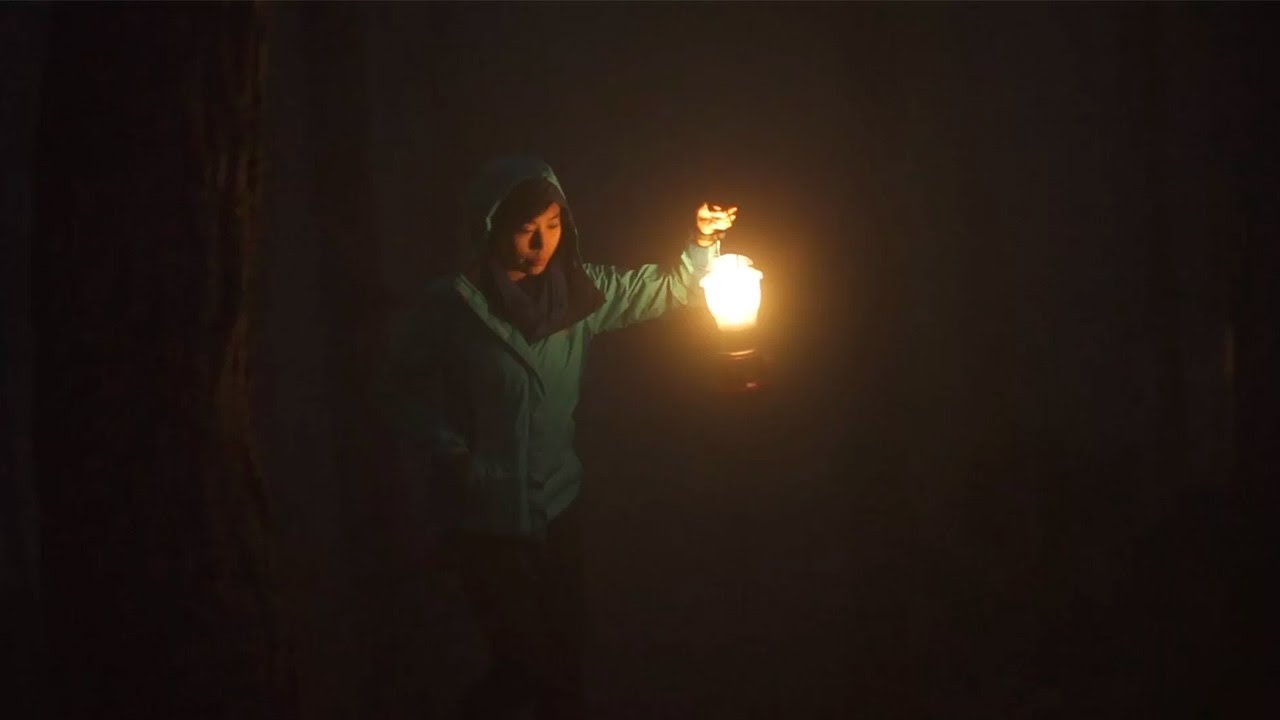 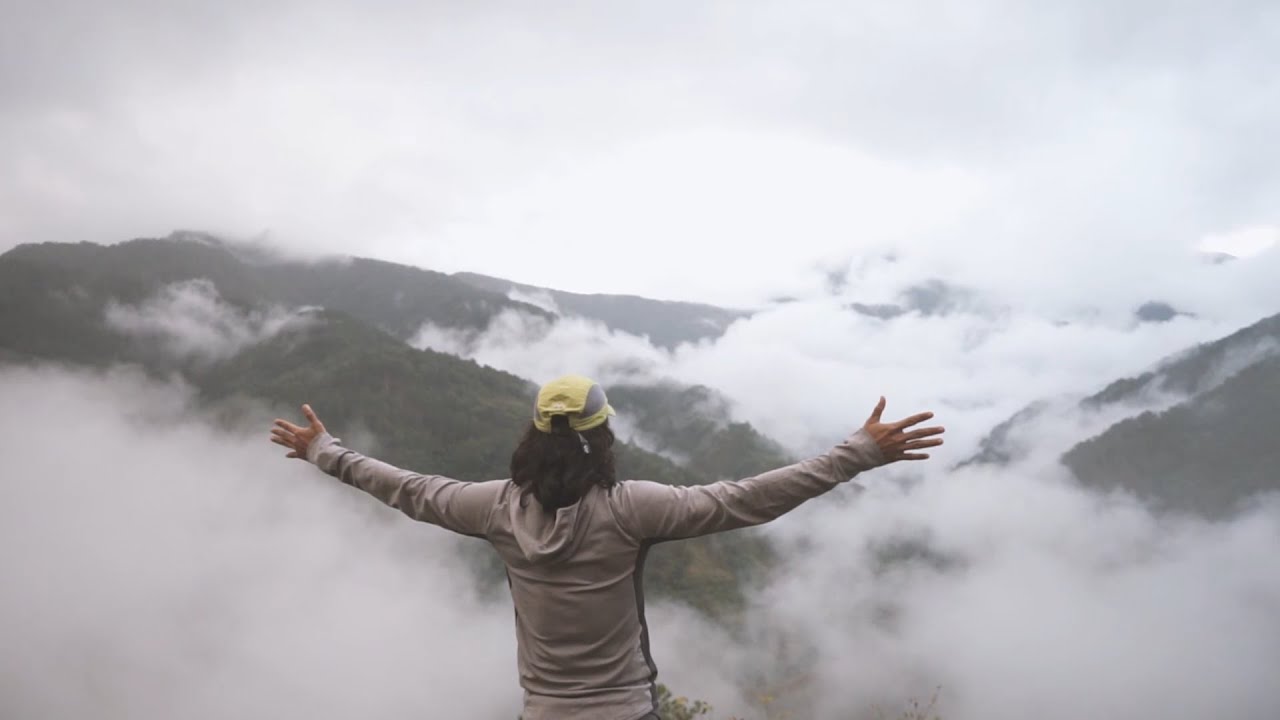 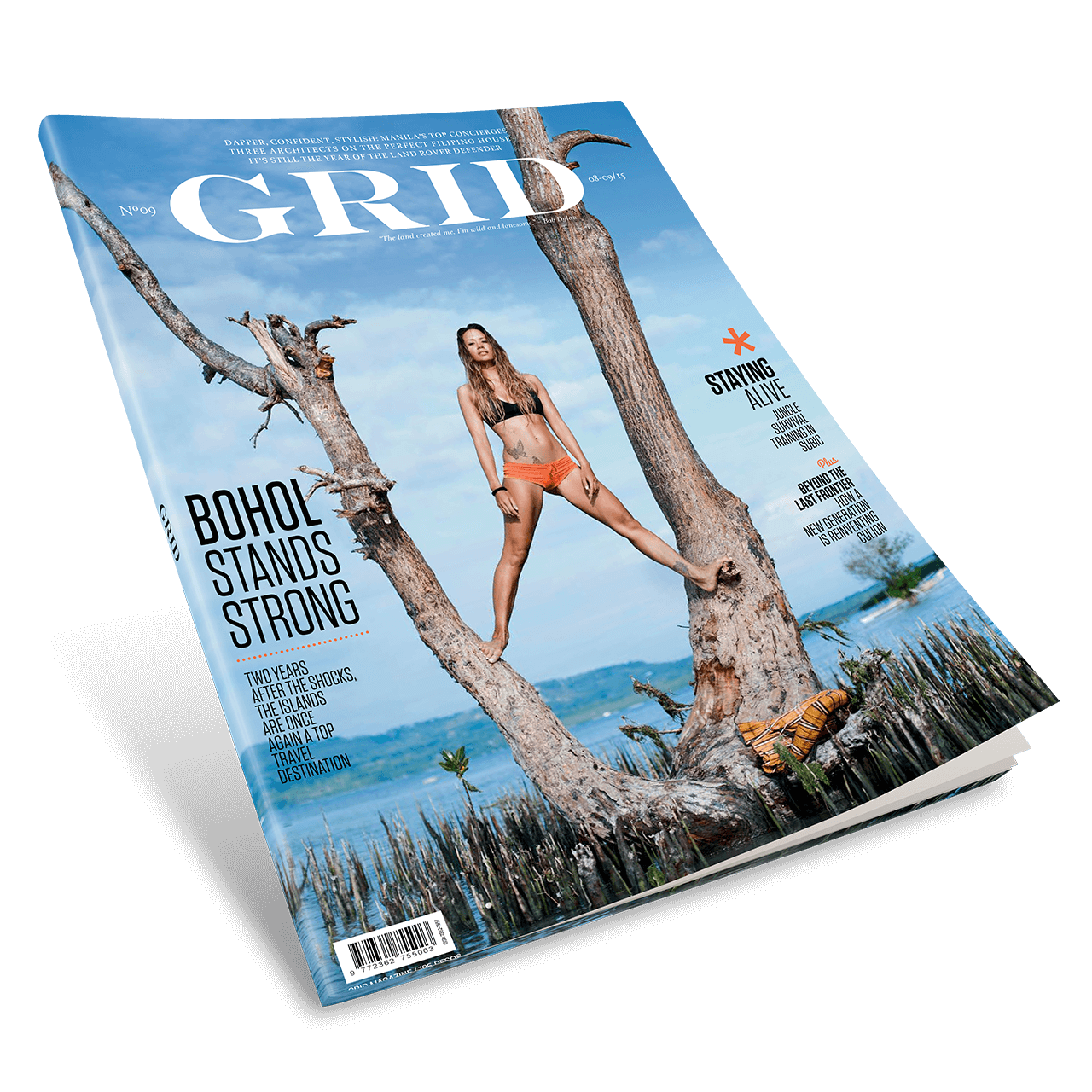 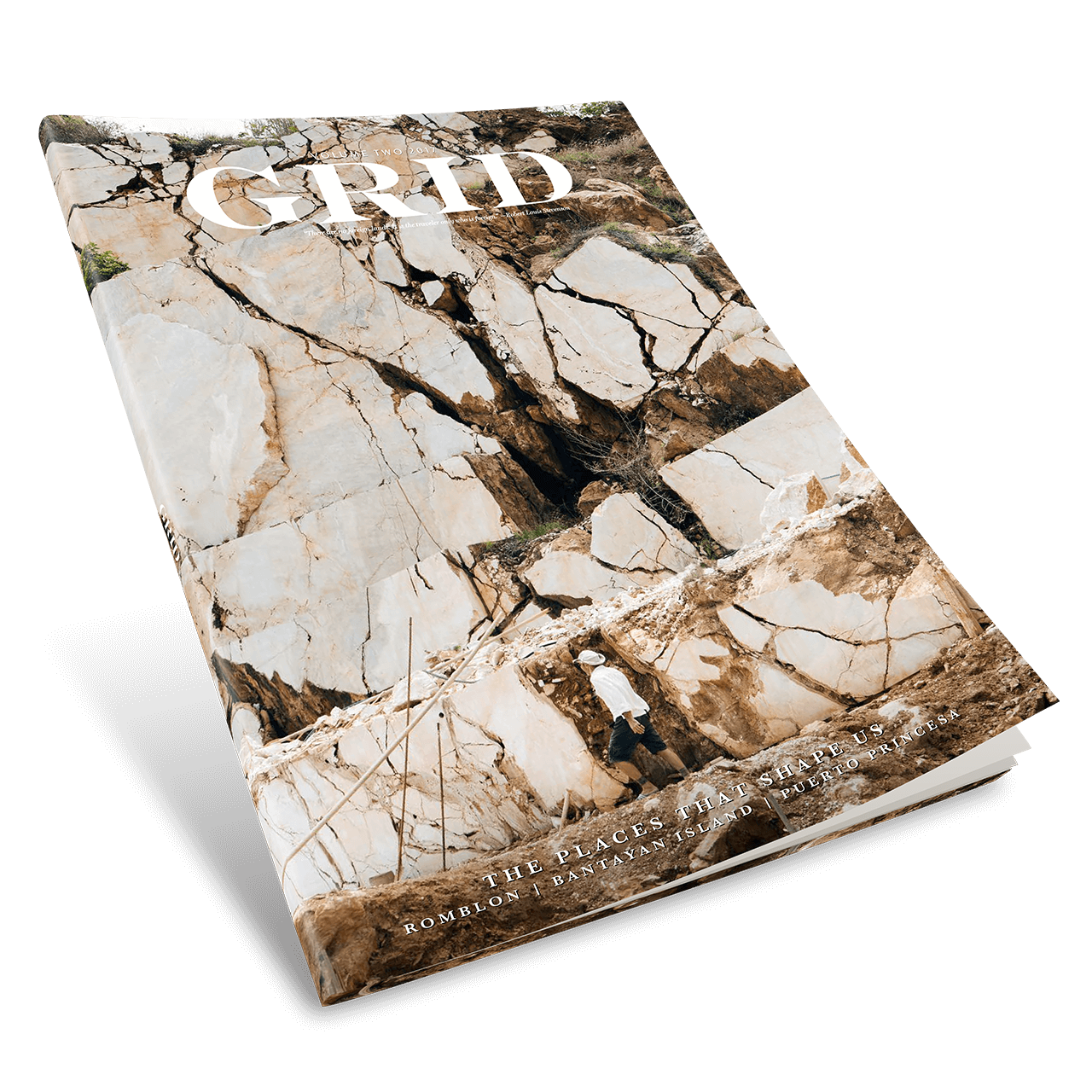